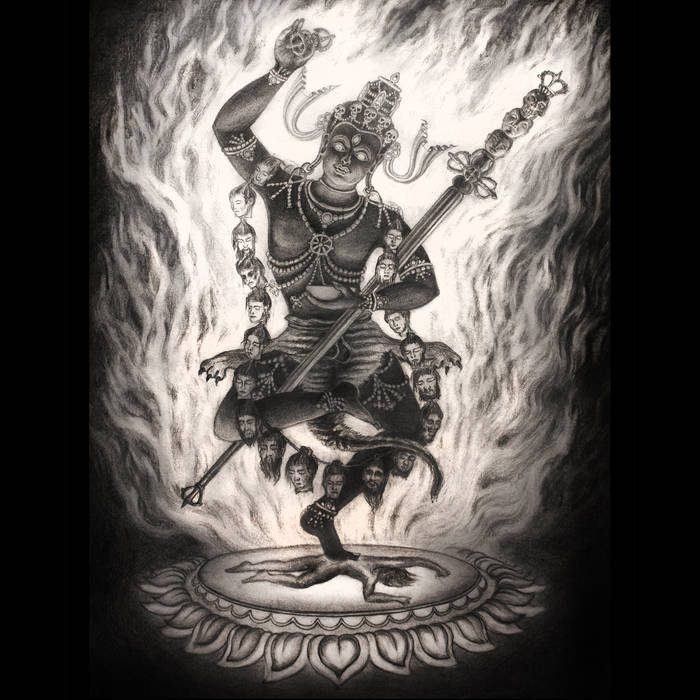 Taking inspiration from the ancient Indo-Tibetan Vajrayāna tradition, Heruka's demo entitled, བརྟུལ་ཞུགས་སྤྱོད་པ་ (Tulzhug Chöpa), is an ode to the realised tāntrik sages of this sacred landscape whose wisdom minds dwell in the indivisibility of bliss and emptiness.

First initiated over two years ago, the project's research work involved an in-depth study of the existing Vajrayāna tradition in the Tibetan lineages that currently thrive in India and Nepal along with a sincere inquiry in its Indic roots. The research work behind the lyrics and ideological concept behind Heruka included a thorough study of different complex aspects of the tradition's philosophy and soteriology, which was further strengthened after receiving transmissions and teachings from various contemporary Vajrayāna masters hailing from India, Tibet and Bhutan who have meticulously preserved and mastered several outer, inner and secret aspects of the tāntrik path.

The demo consists of two tracks, དུས་གསུམ་སངས་ (Dusum Sangye), a ritual ambient hymn sung in Tibetan language, which pays homage to Guru Padmasambhava, an 8th century Indian Mahāsiddha (Great Adept), who is credited with establishing Vajrayāna in Tibet. The second and self-titled track, བརྟུལ་ཞུགས་སྤྱོད་པ་ (Tulzhug Chöpa), is a death/doom and ritual ambient track, which pays homage to the inner and secret aspects of the philosophy, path, unconventional behaviour and appearance of a realised tāntrik yogin. The track is sung in a mix of Sanskrit, English and Tibetan languages, and it utilises actual tāntrik ritual implements such as a damaru (hand-held drum), drilbu (ritual bell) and pre-recorded samples of rolmo ('fierce' cymbal) and (dung chen) trumpet, which are generally used by practitioners during tāntrik ceremonies in Vajrayāna monasteries or at hermitages.

May those who chance upon these sacred, wrathful chants realise the ultimate, essential nature of everything — sunyata!

Homage to the siddhas in whom absolute space (ཧེ་) and primordial wisdom (ཀ་) are united (རུ་)!

Bandcamp Daily  your guide to the world of Bandcamp

Guests include Kassa Overall and Muriel Grossman, plus an LP of the week by Van Hunt.